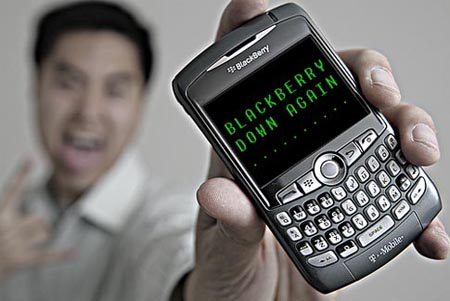 Since Monday the 10th of October 2011, the only song that’s been playing in my mind is: ‘How do I live without you?’ What did I ever do before? How did I stay in touch with my friends? How can I go on living if I can’t BB the ones I love?

Then this morning, driving on my way to work, I heard a magical sound – a sound I haven’t heard in ages. As I swerved, and almost hit a car, while trying to reach for my Blackberry (I don’t BB and drive, but this was an exception – my baby was back!) I saw that yes, Oh YES, it was true. They say if you love something, set it free and if it’s a butterfly it will return. Guess my BB is.

So what was wrong? Word on the street was:
The switch, with the thing, broke the stuff…
“Although the system is designed to failover to a back-up switch, the failover did not function as previously tested. As a result, a large backlog of data was generated and we are now working to clear that backlog and restore normal service as quickly as possible”

This was not just a big deal, this was a huge deal (because the only reason I ever got a blackberry and not an iPhone 4S, was so that I could BB). But I guess ever since I’ve had to make due with WhatsApp and messaging, it might finally be time to make the switch over. Because turns outs that ‘BB, I really can live without you.’

So now that we know why it wasn’t working, question is…

Can I ever trust my BB again?